The St. Augustine Art Association is proud to provide a voice and stage for Veterans with a riveting, sometimes raw, emotionally-charged exhibition, Then & Now: 50 Years of Veteran Experiences. This display will demonstrate the healing power of art by showcasing eight individuals who use painting, sculpture, photography, poetry and other creative outlets to work through the trauma and grief they have incurred through their military service.

As a special ​shout-out​ to an American Icon & Hero, former POW Army Major (RET) Theodore Gostas–held in captivity for over five years, four and a half spent in solitary confinement–an installation will be constructed depicting his 5ft by 8ft holding cell. The narrative of this display will follow the story of two Vietnam veterans, Gostas & Domask, supporting each other for 50 years as “Foxhole Buddies” after Gostas’ returns to active duty.

GET INVOLVED:
Become a Sponsor!
Click here to view more information about becoming a Sponsor.

For other ways to get involved,
contact us at info@staaa.org.

Thank You To Our Sponsors: 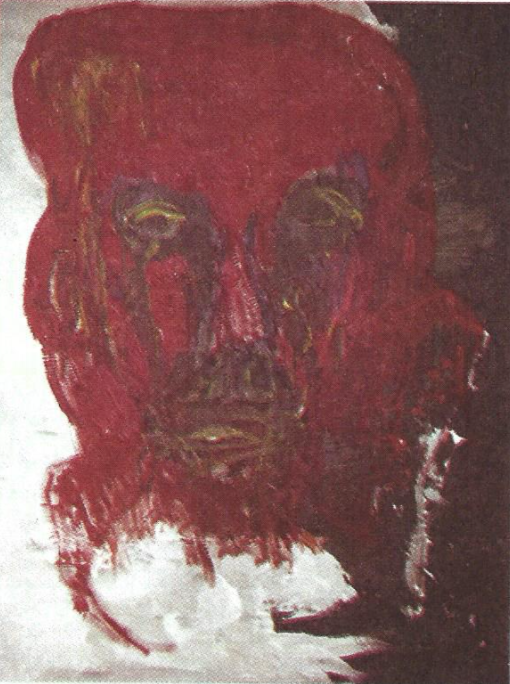 Ted Gostas was captured in 1968 during the TET OFFENSIVE. He spent 5+ years in captivity as a POW–4.5 years of this time in solitary confinement. He has received the Bronze Star medal and two Purple Hearts. Joseph Galloway and Marvin Wolf recognized Gostas in their book They Were Soldiers, which profiled 48 Vietnam Veterans who served bravely with astonishing contributions after their returns. Others profiled in the book are General Colin Powell, former Senator Max Cleland, and FedEx founder Frederick Smith.

Gostas notes, “My psychiatrist considered me the most tortured prisoner of war in Vietnam because I was the highest ranking intelligence officer, and (I had) the worst attitude.”

Ted is the most-renowned former Vietnam POW artist/poet. As an American icon and hero, his art creations are national treasures of significance. 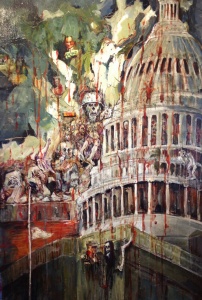 Exhibit Curator Jerome H. Domask served in the Army during the Vietnam war (Dec. 1967 – Dec. 1968), in the Military Advisory Command Vietnam (MACV) as an advisor to the Army of the Republic of Vietnam (ARVN) in the Cholon District of Saigon during the 1968 TET Offensive.​

Domask states, “The creation of the war series, Reflections – Vietnam War 45 Years Later, h​ad been a difficult and painful process. It opened an escape hatch to cry out, breaking down barriers of anger and betrayal. I had returned to an America that vilified veterans of the Vietnam War.”

He has won numerous awards & recognitions with many national and local showings.

“My mission is to create visual images that ignite a process of self-reflection and bring a sense of tranquility to the healing process. The creative process I employ is devoted to color, texture, and technique. All forms of surface, including canvas, wood, and metals, serve to transform while applied art helps to empower.” 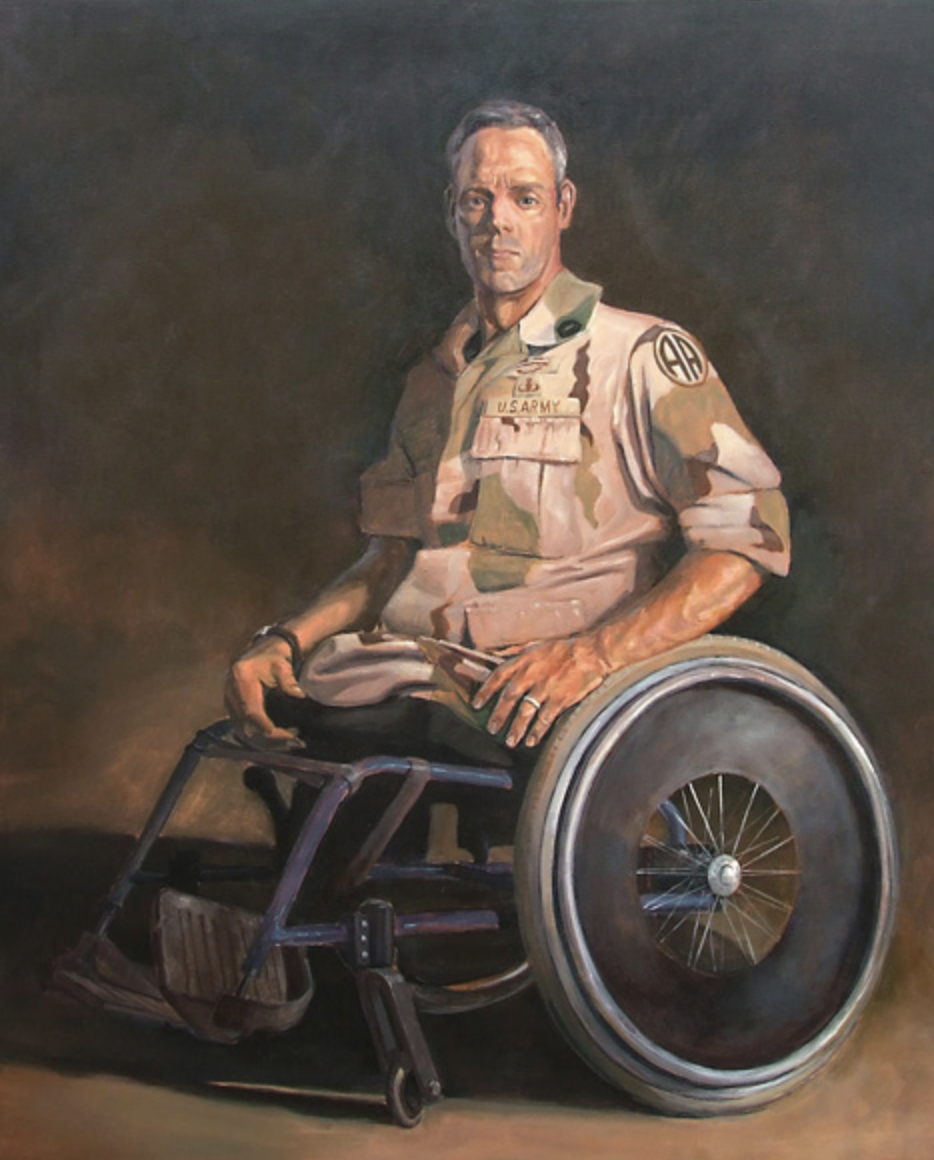 “War is one of humanity’s most defining experiences, yet one of the most misunderstood by those who have not been there,” explains Rohde. “My Meditation on War series of paintings is an attempt to give non-veterans a bit of insight into some of the things that veterans live with.”

Skip’s paintings have won national and regional recognition and awards, and have been featured in multiple solo exhibitions across the eastern U.S. A series of approximately 80 drawings, entitled Faces of Afghanistan, is in the permanent collection of the Smithsonian Museum of American History, D.C. 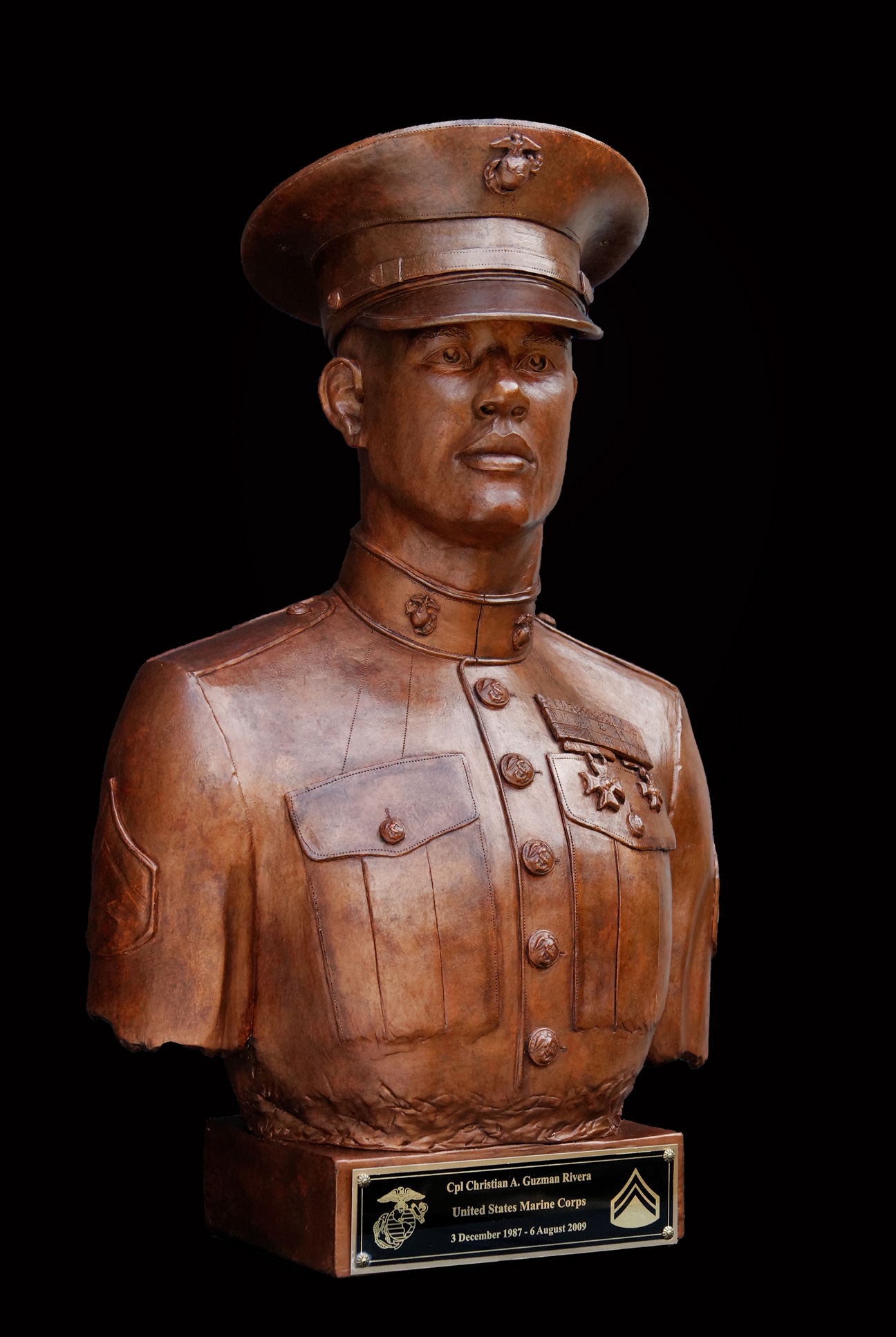 After a life-changing medical event, he developed his skills as a sculptor. His due diligence and tenacity resulted in creating numerous lifelike busts for Marines and Navy Corpsman killed-in-action from Florida. He also created busts for members of his Vietnam unit. The busts were gifted to the veteran families and organizations without cost. Cliff is a very humble artist continually giving back to his veteran brothers and their families. 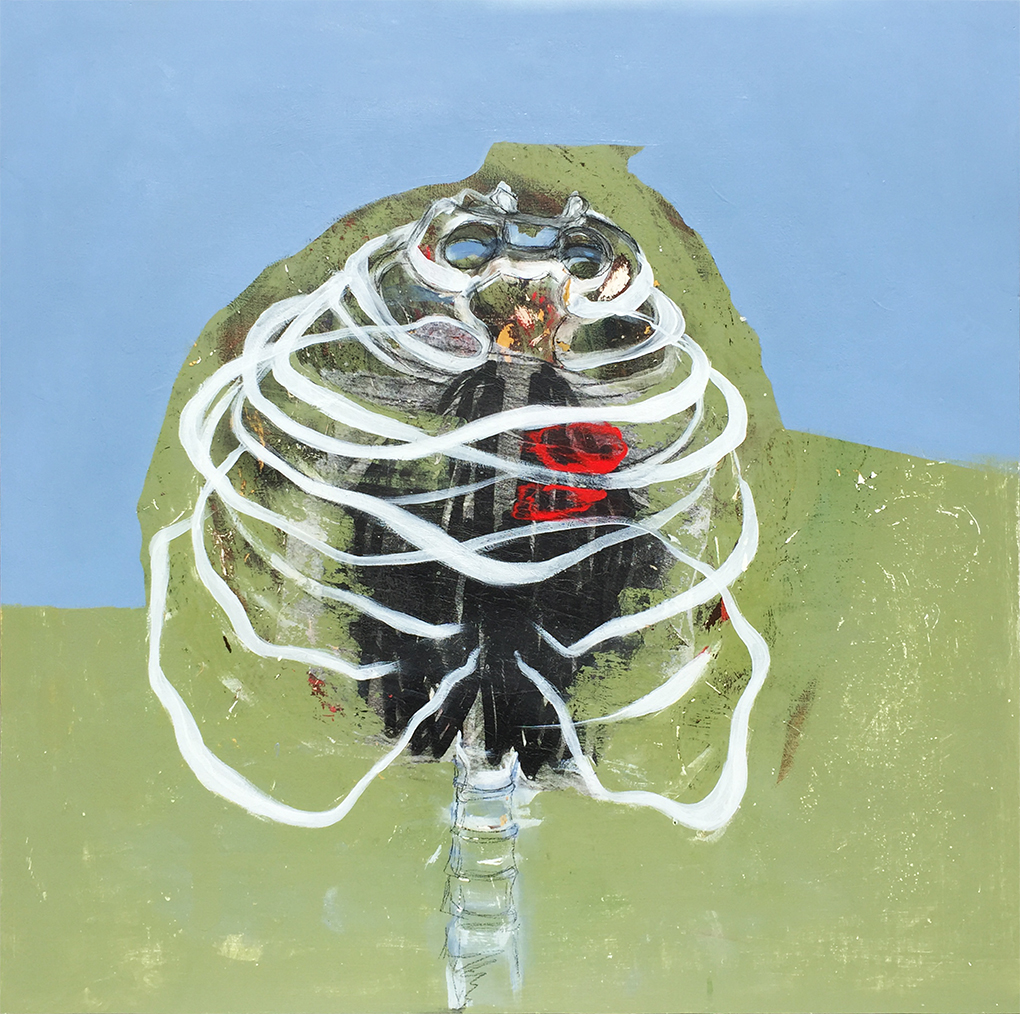 Murphey explains, ​“​It’s​ ​been 20 years since my first battle with suicidal ideation and major depression. I’ve had some relapses since then, but with each fight, insights surface and propel me to more self-discovery and deeper healing. It wasn’t until my last relapse four years ago that I discovered what my ‘service to others’ would be, and my journey of healing through creativity would be born.”

Saori creates powerful, insightful images of her healing journey. She is always experimenting, always giving back, and always moving forward with her expressive and maturing art creations. Saori states that her recovery journey has taught her to feel a real freedom that she never felt before, after having experienced and knowing its opposite. 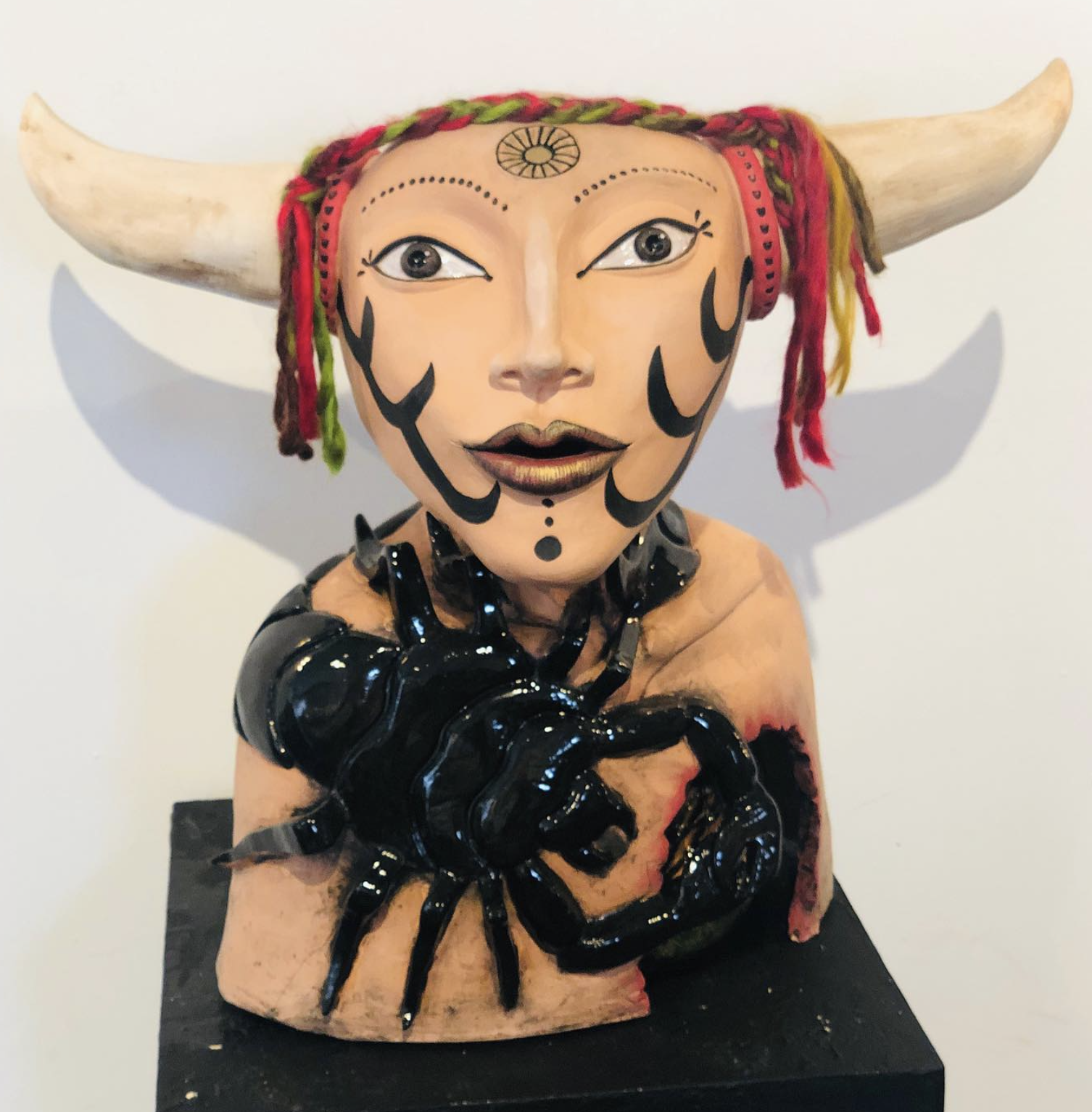 Maria is another “Woman Warrior” spreading her wings as an activist leader in veteran outlets for reconnection and growth. She earned a B.S. of Art Therapy with a focus in Ceramics and Art History, graduating with honors.

“Operation Iraqi Freedom was the war of my generation, we put our lives on hold and shipped off to fight in a foreign world, many of us came home physically abled, but mentally and emotionally fragmented. Caught in the blinding and suffocating sand storms that at times seem to engulf you whole,” says Maria. “Semper Fidelis, always faithful, has been my life motto since, and I intend to live it every step I take, combat boots on or not.” 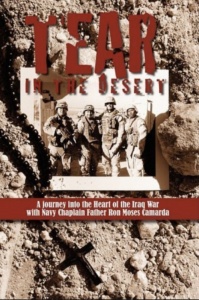 Father Ron served as a Catholic Chaplain in the fierce battle of Fallujah from October to December in 2004. He received dozens of casualties everyday at Bravo Surgical–M.S.A.H. type Marine Medical Battalion. He personally received over 1,500 casualties and 81 deaths; over 12 died in his arms.

His book, Tear in the Desert, takes readers on a dark journey into the Iraq War– “Nothing prepares us for the gruesome details that mark our souls and spirits forever.” Father Ron Camarda has been a pastoral counselor, FL VFW State Chaplain, and is currently the pastor of St. Monica Church in Palatka, FL.